Nine miles across the Au'au channel from West Maui lies the privately-owned island of Lanai. It was once the largest pineapple plantation in the world; now very little pineapple is grown there. The island's economy is centered around the two resort hotels - the Manele Bay Hotel and the Lodge at Ko'ele. Most visitors to the island come over for the day from the island of Maui. The island is very dry and doesn't have the lush beauty found in Maui's rainforests, but Lanai has the longest stretch of coral reef in Hawaii and the beaches on this island are down right deserted. The area around the Manele Bay hotel is particularly beautiful, with uncrowded beaches, fascinating tidepools, great snorkeling, red seacliffs, and lots of sun. But the biggest attraction of Lanai is the large pod of Spinner Dolphins frequently encountered on Lanai's southern coast ... watching these marine mammals in their natural environment will surely be one of your most memorable vacation highlights! 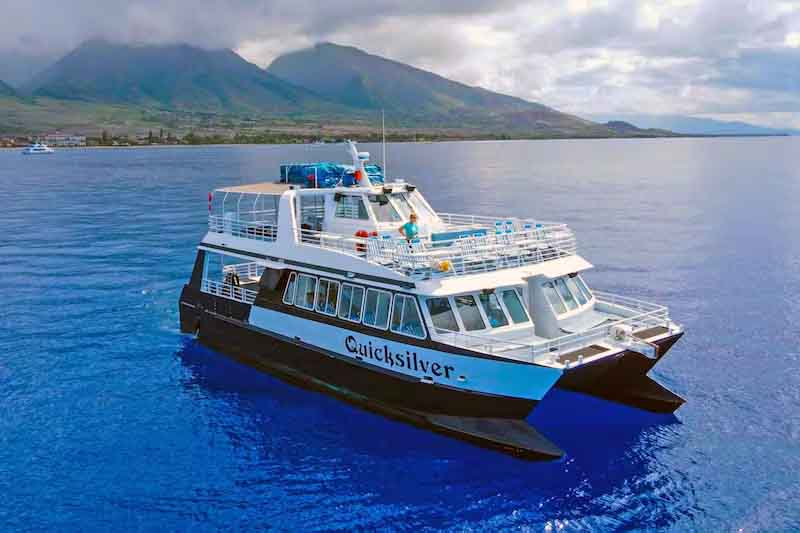 Quicksilver is a large, comfortable powered catamaran that offers a full-featured 5.5 hour trip to snorkel Lanai's coastline and encounter the pods of spinner dolphins. 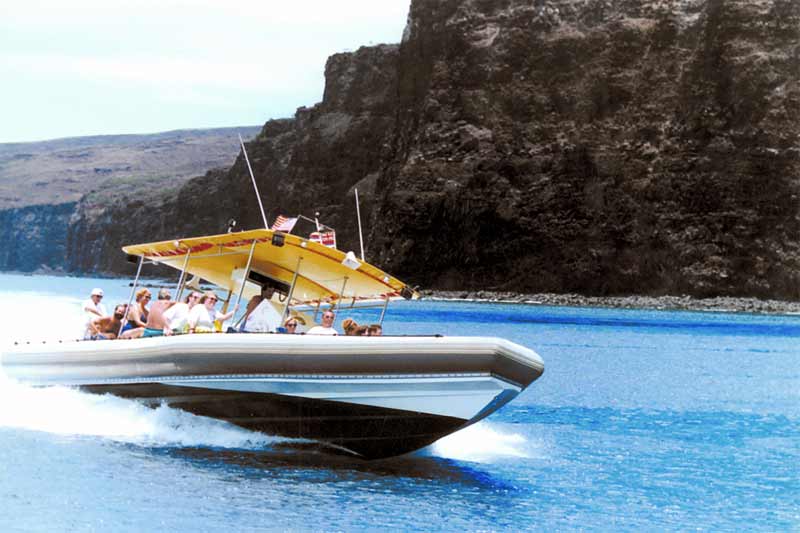 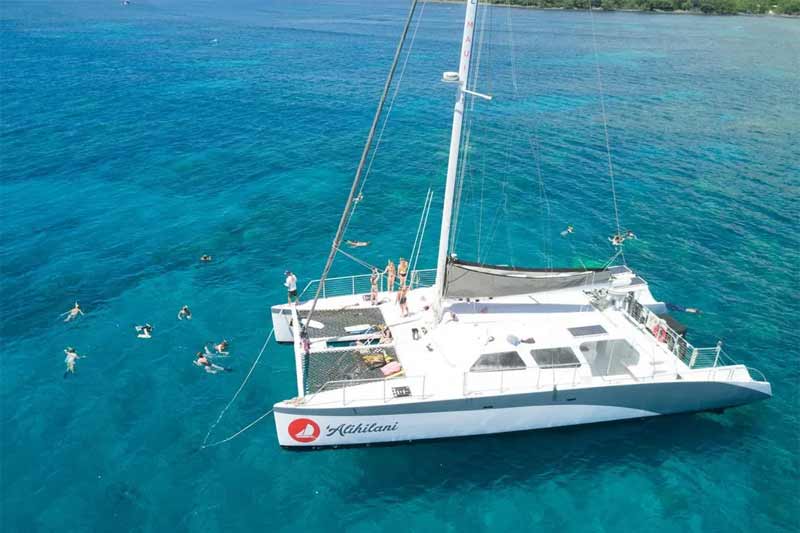 Join Paragon's crew for exhilarating adventure to the beautiful snorkeling reefs of the island! Paragon specializes in performance sailing, offer a two-location snorkel trip including lunch. 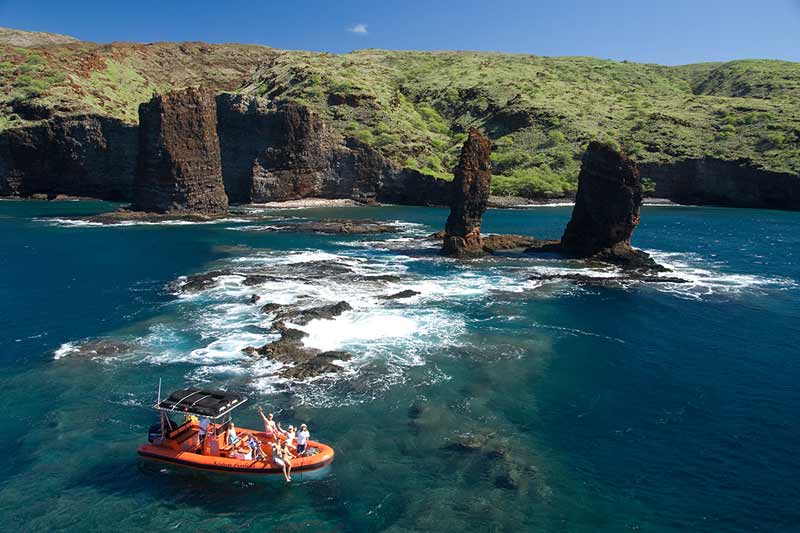 Ocean Riders is the ultimate Lanai adventure, and on their full-day excursion they are the only tour operator to completely circumnavigate the island in a zodiac raft (a 60+ mile trip!). You will see shipwrecks, sea caves, lava rock pinnacles, and snorkel at fantastic spots miles from another boat. 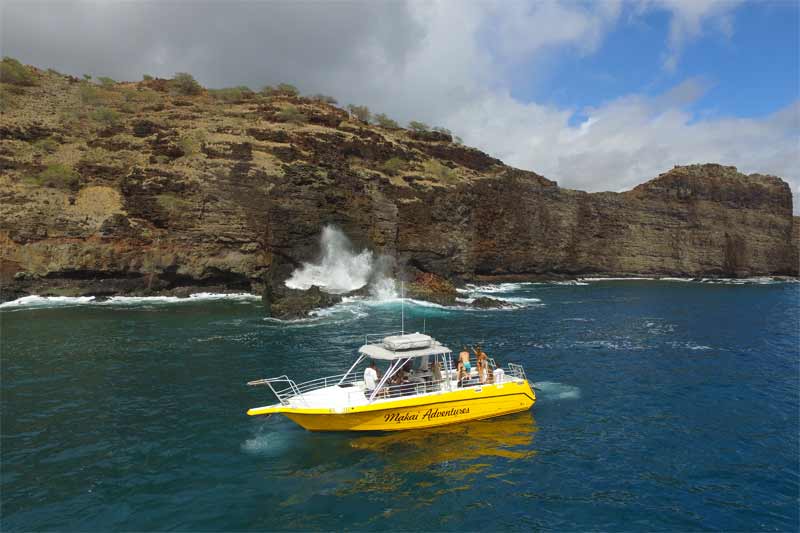 From April through November the fast speedboat Kainalu runs a 6 hour snorkel tour to Lanai and is a great trip for beating the crowds on larger boats.

A Lanai Snorkeling is a must-do on my list of Maui activities. If you have time for two snorkel boat tours, go to Molokini and Lanai. If you only have time for one, go to Lanai!!! The reef there is just as good as Molokini (better in places) with lots of fish and turtles … and there are a lot less people.

Lanai trips are definitely a good way to go for people staying in the West Maui area (Kapalua, Kahana, Honokowai, Kaanapali, and Lahaina). Lanai trips leave from Lahaina, so much less driving is involved than most of the Molokini boats.

While none of the Lanai trips GUARANTEE dolphin sightings, it is unusual to not encounter dolphins along the south coast of Lanai. Your chances of seeing dolphins is in the 75-80% range on any given day.

Lots of people ask if they can swim with the dolphins. The honest answer is "no" Snorkel tours ar enot permitted to drop people in the water where dolphins are swimming … they are protected marine mammals. You will likely see plenty of activity just watching them from the boat … the large pod of spinner dolphins at Lanai is very active. You will likely witness acrobatic behavior and dolphins swim swim on both sides of the bow of the boat just a few feet away from you.

So now you know you want to go to Lanai. Which boat should you do?

The Lanai Explorer is our most popular tour …. it offers the adventure of rafting … but more comfort than most rafts as there are real seats on board the vessel (you don't have to sit on the innertube sides of the raft unless you want to). The Lanai Explorer also offers quite a bit of shade and has a marine head on board when nature calls. We absolutely LOVE the Lanai Explorer with Landing tour. Grab your camera and hit the trails that go out to the point beyond Hulopo'e Beach … see the colorful tidepools and sea arch, scrample down a wooden ladder to the hidden beach that looks out to Sweetheart Rock (the Hawaiian placename is Pu'u Pehe), and hike up to the overlook. You can even walk up to the Manele Bay Hotel … the place Bill Gates rented out entirely when he got married here on Lanai. This tour is doable for the majority of our clients … but not all. Keep in mind that there is a walk of about 5-7 minutes each way to and from the beach.

The Landing version of this tour is offered on Mondays, Wednesdays, and Fridays. On Tuesday, Thursday, and Saturday they do a non-landing version of the Lanai Explorer which is a great choice for people who have been on-shore at Lanai before … and want to spend more time out on the ocean around the island.

Paragon Sailing offers a tour that is structured very similarly to the Lanai Explorer with Landing, only the vessel used is a beautiful sailing catamaran. It's got more creature comforts and the trip is a little "higher end" than the raft. Sailing is really relaxing ... it's a great feeling to have the boat powered only by the wind.

Finally … the trip for the die-hard adventurer. Ocean Riders is an awesome tour … if you are up to the challenge. When you leave the harbor at 7:00am be aware that it will be 7 or 8 hours before you will see another white porcelein seat with chrome handle on the side of it. This tour can be rough at times … but in terms of the amount and variety of snorkeling, the overall distance the tour covers, and the value you get for your dollar … this is the best itinerary in Hawaii for those of you die hards out there! Tell your captain you want to snorkel at Shark Fin! It's one of the few places you can see Pyramid Buterfly Fish.