Social distancing has reduced tour capacity and some events are selling out TWO MONTHS in advance!!! Book tours NOW for JULY and AUGUST or you will not get space! We are not kidding. If you do not plan ahead you will be disappointed.

Snorkeling and dolphin watching along the azure blue leeward coast

Ocean Joy offers a guided tour of the offshore reef

where a variety of exotic tropical fish can be found

Colorful reef life ... this is a pencil urchin

Wide swim platforms for easy access back onto the boat

What's the big attraction at the front of the boat?

A pod of spinner dolphins ... seen almost every day!

Occassionally dolphins will swim right through the snorkel site

Whale sightings are common from December through April

A humpback whale shows its tail as it begins to dive

Enjoy a beautiful evening on their sunset cruise

Reserve Now!!!
Join the friendly and service-oriented crew of one of Oahu’s newest and most state of the art powered catamarans for a fun-filled and awe-inspiring adventure along Oahu’s Waianae Coast. The vessel’s name is Kai ‘Oli’oli … kai is Hawaiian for “ocean” and ‘oli’oli means “pleasure or joy.” This boat is aptly named as this is their goal … to give you a pleasurable, joy-filled experience on the ocean as they take you to a secluded snorkel spot where turtles and rays and tropical fish flourish. They go out of their way to find pods of dolphins so you can watch them play in their natural environment. During humpback whale season from December through April you’ll likely experience encounters with these giants of deep. And if you join them on a snorkel / sunset combo tour you’ll be given the opportunity to witness one of the most romantic sunsets on Earth. All of this happens with the backdrop of Oahu’s sparsely populated leeward coast on the west side of the island, far removed from the crowds and pavement of the city of Honolulu.

Kai Oli’oli (Ocean Joy) is a spacious and fast 61′ powered catamarn that is limited to just 49 guests per cruise. This vessel features twin 490HP engines for power, streamlined hulls for speeds of up to 30 knots, wide swim platforms at the rear of both hulls for easy access in and out of the water, and SIX (6) warm fresh-water showers to rinse off the salt when you get back on board. The time alloted for snorkeling on all tours is one hour. One of the staff acts as a naturalist and leads the group around the snorkel site.

COVID-19 schedule update: Ocean Joy is operating daily, and they are now permitted to operate at full capacity !!! This is great news! Hopefully complimentary transportation from Waikiki will be available soon.

The early morning cruise typically offers the calmest water of the day and is the best for snorkeling. Waikiki pickups range from 6:00am on the far east side to 6:55am in the Ala Moana area.

The midday cruise typically offers the most time watching dolphins as the captain already knows where to find them based upon sightings during the 8am tour. Waikiki pickups range from 10:00am on the far east side to 10:55am in the Ala Moana area.

One hour of snorkeling followed by scenic cruising along the Waianae Coast while you watch the sunset. The price and length of this cruise varies according to the seasons; during summer months when the sun sets later the tour is an hour longer than during the winter months. Waikiki pickups range from 2:00pm on the far east side to 2:55pm in the Ala Moana area.

One hour of snorkeling followed by scenic cruising along the Waianae Coast while you watch the sunset. The price and length of this cruise varies according to the seasons; during summer months when the sun sets later the tour is an hour longer than during the winter months. Waikiki pickups range from 2:00pm on the far east side to 2:55pm in the Ala Moana area.

Tour includes: Complimentary transportation from Waikiki hotels, snorkel gear, snacks & beverages (alcoholic and non alcoholic). If you are not staying in Waikiki, check in at the Ocean Joy Desk at Malakole Harbor (GPS: 21.326682, -158.121135 Click to view map).

What to Bring & Wear: Wear swimsuits and bring a towel and sunscreen.

Note: All phases of each cruise are at the Captain’s discretion based upon ocean conditions, including snorkeling. All participants must sign a waiver of liability prior to participation. 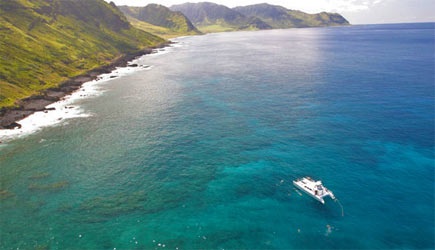 Crusing along the leeward coast 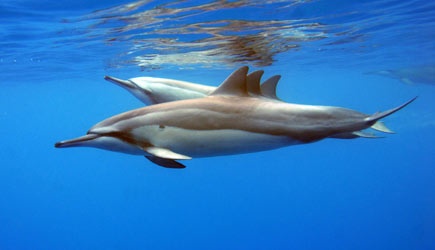 Dolphins are a familiar site!

Ocean Joy Snorkeling midday and sunset snorkel tours may be available for you while you are in port in Honolulu for the day, but we do need to check with the tour operator to make special transportation arrangements. Please call us toll-free at 1.877.678.7333 so we can check on availability for your date. For those who are going out on the Pride of America who are arriving in Honolulu a few days early, or staying a few days after your cruise, this tour is a great option.

For most guests, your Ocean Joy experience will begin with pickup near your Waikiki hotel … they use Star of Honolulu for the 50-60 minute ride to the Ko’Olina area. Star of Honolulu is a premium transportation company and their buses are plush and professionally operated. The driver acts as a guide to and from the cruise, pointing out sites of interest along the way as you pass through downtown Honolulu. Our driver was VERY personable, and when we got back on the bus at the conclusion of the snorkel tour we were even given wash cloths and mints for the ride home! The treatment was first class getting there and back.

As the vessel was departing Ko’Olina Marina we were treated to a view of the “Black Pearl,” the pirate ship used in filming that well known movie series starring Johnny Depp (it was in dry dock just across the channel from the harbor). We turned right and headed west along the coast, past the new Disney Aulani resort. Our captain advised us that the dolphins were a long way up the coast, so he felt it would be best to do our one hour snorkel stop first, then spend the rest of the tour cruising the coast and watching the dolphins.

Ocean Joy offers premium snorkel gear … and plenty of instruction for the first time snorkeler. Entry to the ocean was easy; both hulls of the catamaran have a wide swim platform that rests at the ocean’s surface making this boat a lot easier to get off and on than one of the rafting tours. Once in the water, one of their staff paddled around on a surfboard and conducted a tour of the reef for us. It’s nice when companies do this; snorkelers not only get to see fish and sea creatures they might have otherwise missed; they also learn something about them. Our guide took us to a ‘turtle cleaning station,” a place where Hawaiian green sea turtles (honu) hang out on the bottom and allow cleaner wrasses and other fish to dine on the tasty algae that grows on their shells. It’s sort of like a TV star sitting in the dressing room having their makeup and hair done by others. And the turtles are definitely the star of this show.

At least they WERE the star of the show, until a beautiful and graceful spotted eagle ray came cruising through our snorkel site! Ocean Joy also has a photographer who takes photos underwater during your tour, and he caught some great shots of this ray! The photographer also takes pictures on board the vessel … capturing images of all the guests on board and of the scenery and the dolphins … and a CD of those images is available to purchase at the end of the tour.
When snorkeling was over we got back on board and were greeted by a member of the crew holding the shower nozzle. Having someone rinse the salt water off me with a hot water shower nozzle felt great! I wish all snorkel boats were able to do that!

The captain delivered on his promise of finding dolphins after we snorkeled (we are told that he usually does … successful dolphin sightings happen on 80-90% of the tours). The location where we happened to find them was stunning! It was an isolated area where you could see no buildings … just the green ridges of the Waianae Mountains and the turquoise blue water. We encountered a large pod of spinner dolphins, and on numerous occassions a subgroup of five or six dolphins would swim over to the boat and play at the bow.

Ocean Joy is Oahu’s premier snorkel tour … the vessel is state of the art and beautifully maintained. Snorkel gear is high quality, the staff were friendly, we did some great snorkeling and saw lots of dolphins and covered an impressive amount of the Waianae Coastline during our tour. We HIGHLY recommend this tour to our guests!
Another amazing snorkel experience is Dolphin Excursions!