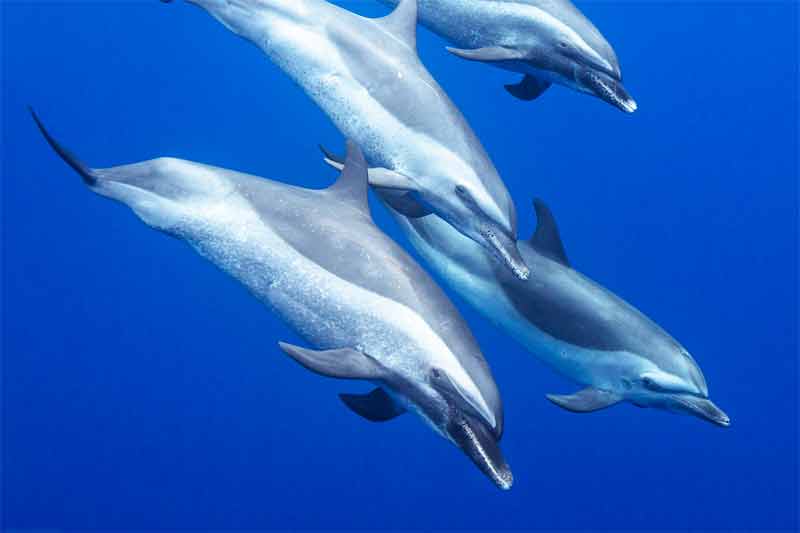 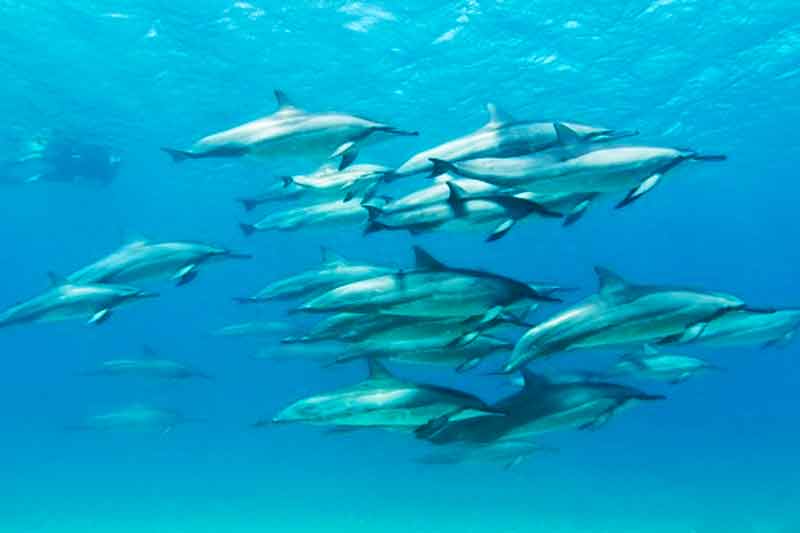 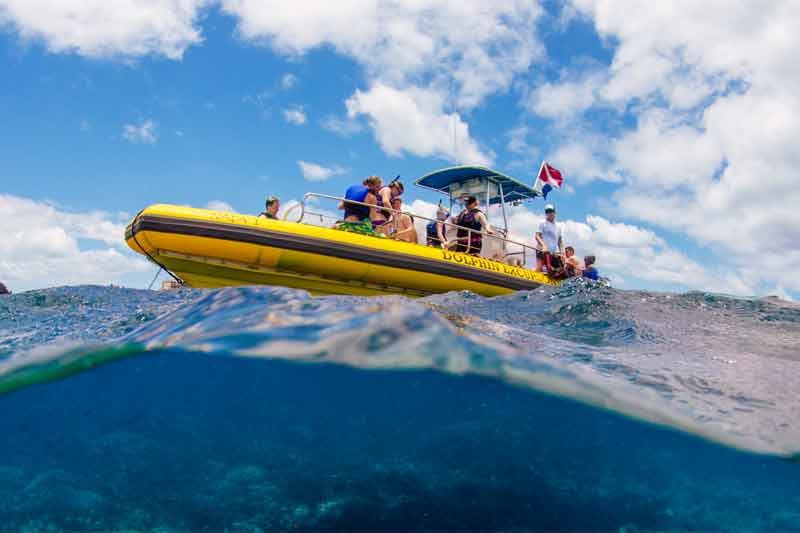 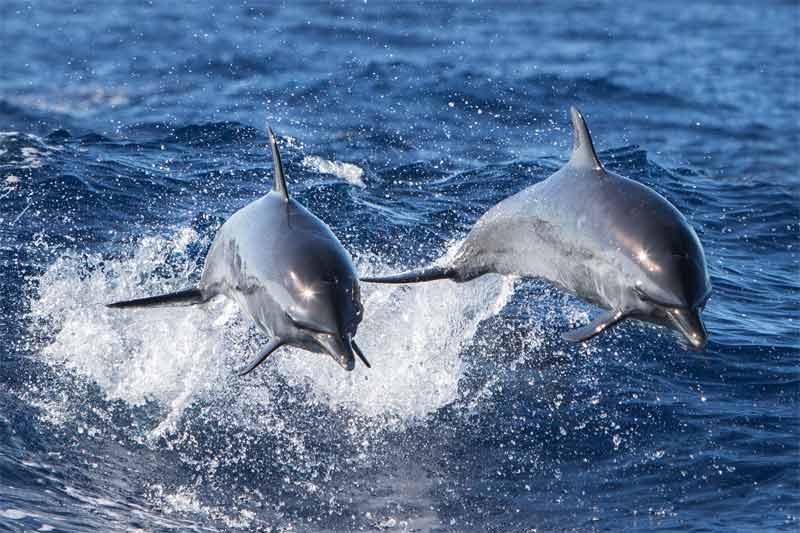 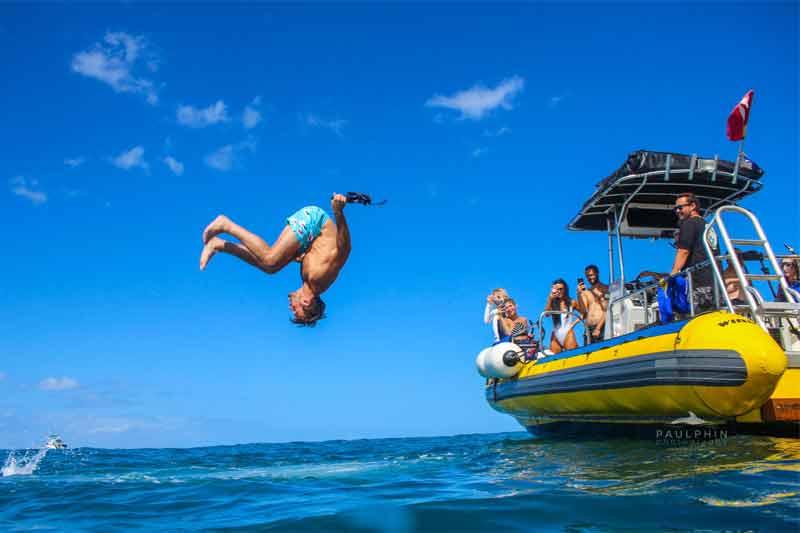 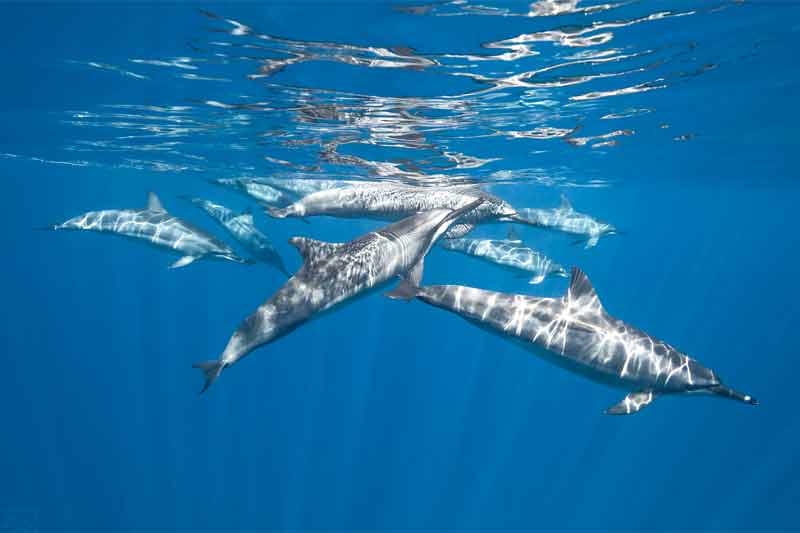 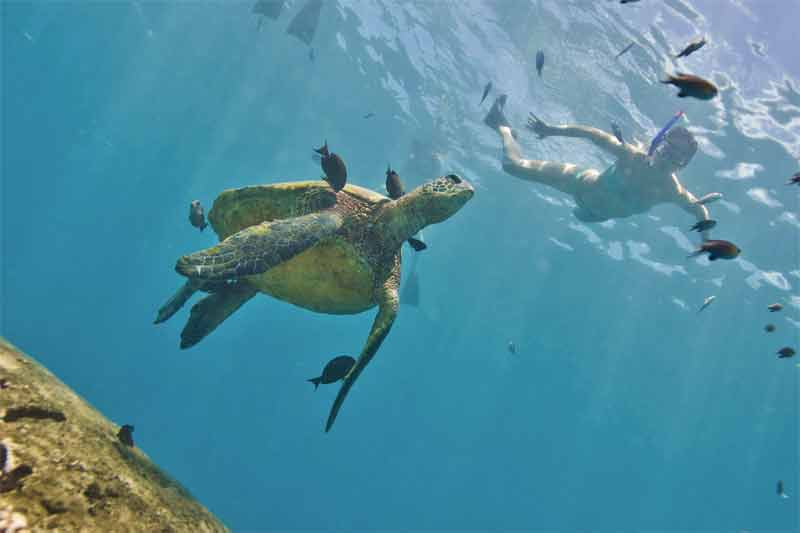 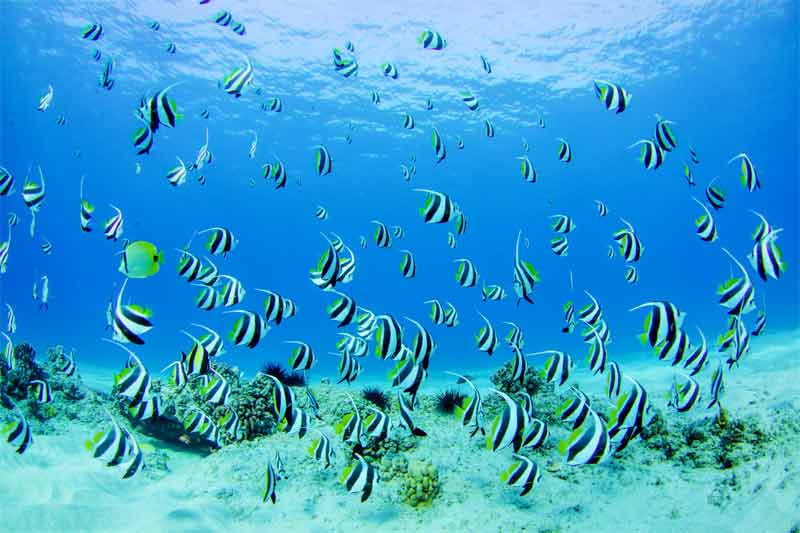 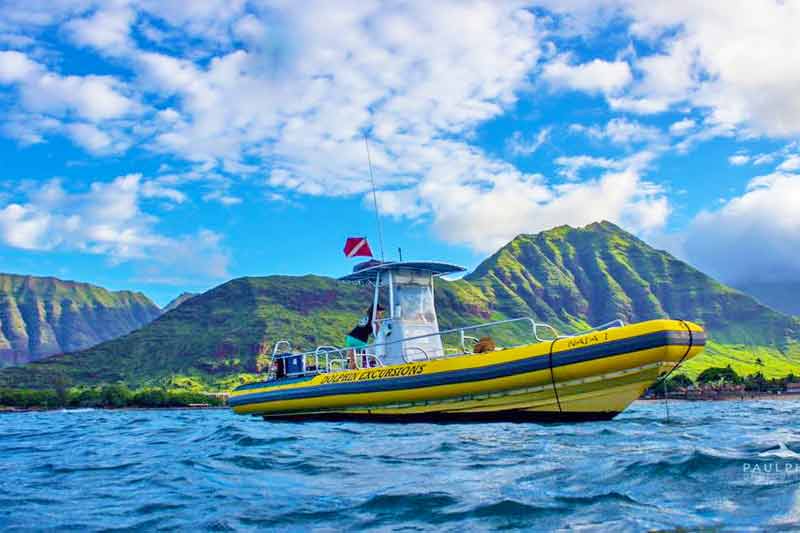 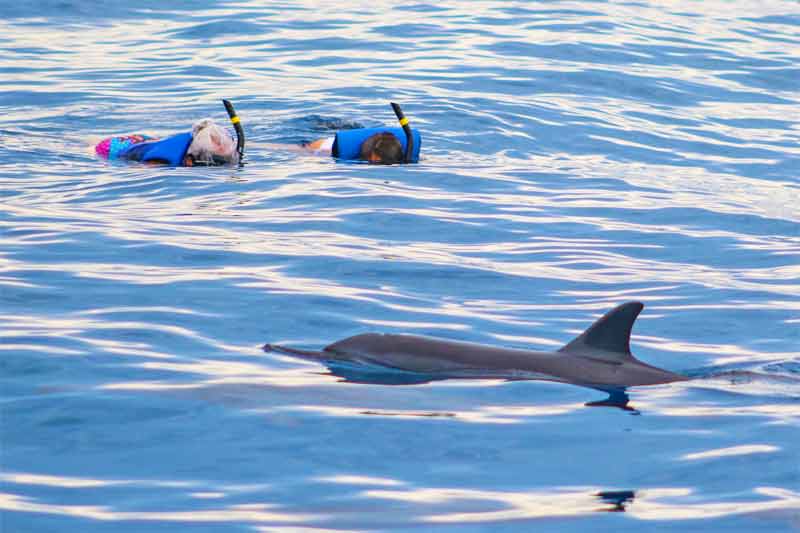 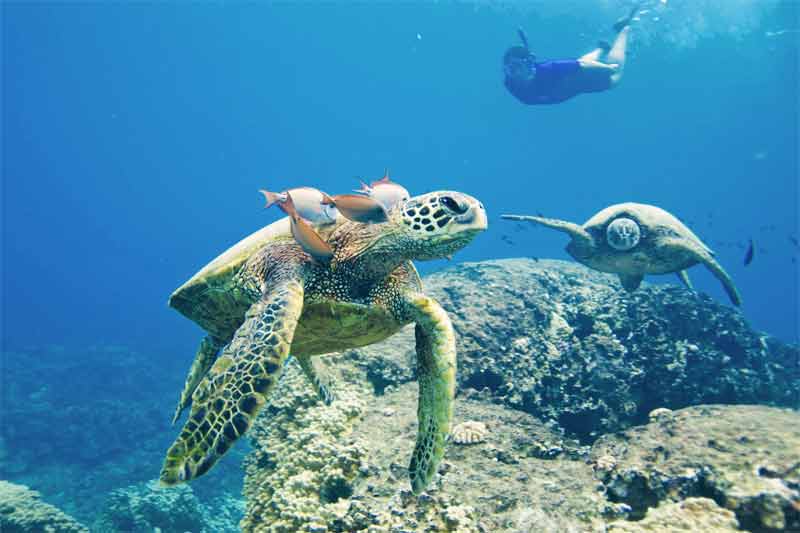 Dolphin Excursions specializes in rafting tours along the remote west shore of Oahu. This area is well known for having the calmest and clearest waters around the island, and is ideal for snorkeling, whale watching (in season) and dolphin encounters. This coastline attracts large pods of spinner and bottlenose dolphins.

Your adventure begins with checkin at the Waianae Boat Harbor on the west side of the island, where you will meet the crew of the Naia I ... a fast, highly maneuverable 32' zodiac that is perfect for these excursions.U Maximum tour capacity is 22 guests.

On a typical tour there will be opportunities to observe spinner dolphins from the boat (all year) as well as humpback whales (December to April). Bottlenose dolphins are also encountered frequently. This is a chance to watch the acrobatic performance of these amazing creatures as the spinner dolphins swim in the wake of the boat, frequently leaping out of the water in amazing acrobatic displays. Success at observing dolphins and whales is very high (in the 90% range on the earlier morning tours). Dolphin Excursions is so confident that you'll encounter dolphins and/or whales (in season) that they will put you on another trip for free if there aren't any sightings during your tour.

The Dolphin Excurions Morning Rafting Adventures are 3 hours in length and offered at 7:00am and 10:30am. Check in is 30 minutes prior to the tour time.

Schedule: Tours are operated daily at 7:30am and 11:00am (except for Christmas, New Years Day and Super Bowl Sunday).

Restrictions: Minimum age is 4 years old. No neck or back injuries and no pregnant women.

What to Bring and Wear: Wear swimsuits and bring a towel, light jacket, and reff-safe sunscreen.

Reservations: Advanced reservations required ... for those who are planning ahead this event is "RESERVE NOW PAY LATER"; we need a credit card on file to finalize your reservation but we do not charge you for this event until a few days before the beginning of your vacation!

We joined Dolphin Excursions on one of their late morning tours. It was a treat for us to experience this part of Oahu from the ocean, as most other water activities are oriented toward the south and east sides of the island. We happened to catch a particularly windy day, and I was rather skeptical about our chances of encountering dolphins in these conditions. When it's windy, the surface of the ocean gets choppy and it can be hard to spot dolphins in the distance.

About 30 minutes into the tour my fears were put to rest as we encountered several bottle nose dolphins. These are a large species of dolphins ... if you grew up in the 60's or earlier you remember "Flipper", right? He was a bottle nose dolphin. This group swam with our boat for several minutes.

Our next encounter was with a large pod of spinner dolphins. These guys are small compared to bottle nose dolphins, but what they lack in size they make up for in enthusiasm! They dance and play and leap out of the water ... and the size of the pod was impressive (in the neighborhood of 80 or so .... it was a little hard to count accurately because they just wouldn't stand still).

We ended the tour with an hour or so of snorkeling offshore from Makaha Beach in an area with lots of colorful fish and a healthy population of green sea turtles.

Dolphin Excursions did a great job of facilitating a dolphin encounter on a "marginal" weather day in windy conditions. That gives me an awful lot of confidence in recommending their operation to our clients. For those who are able, I recommend the early tour time as the winds are typically lighter first thing in the morning and the percentage of success is extremely high! Ocean Rafting isn't for everyone ... it is high on adventure and low on creature comforts. If your idea of a snorkel tour is laying on a trampoline while the catamaran sails leisurely through the water and a staff member hands you a mai tai, then try one of the Waikiki Turtle Snorkel Sails instead. This tour is higher on adventure though ... it's more thrilling to move faster so close to the water.

Can we swim with the dolphins on this tour? Unfortunately not. Federal Regulations effective in the Fall of 2021 has banned any swimming with wild spinner dolphins in Hawaii waters. It's still nice though to see them in their natural environment, and they often put on quite a show!

Dolphin Excurions Rafting is a VERY popular event and sometimes sells out THREE WEEKS in advance during peak travel periods.