Hawaii's sleek and luxurious cruise vessel with views of Waikiki

View the waters off Waikiki from the upper observation deck

Buffet and beautiful dining room on the lower deck

COVID-19 AVAILABILITY UPDATE: The Majestic will resume dinner cruise operations in May of  2021 and we are now accepting reservations for dates on or after 5/1/2021.

Ask a QuestionReserve Now!!!
Enjoy an evening on the waters off Waikiki in the new state-of-the-art vessel called the Majestic!  The Majestic Dinner Cruises are aboard a sleek, yacht-like 150 foot vessel which features two sleek and expansive air-conditioned decks surrounded with panoramic windows and high ceilings, and a large open-air observation deck on top. Cutting-edge stabilization “Seakeeper” technology ensures a comfortable cruise on the ocean. The lower deck includes a roomy dining area where a delicious dinner buffet is served. The bar, lounge, and large dance floor is located on the 2nd floor deck, which is also where the evening show is hosted.

As you enjoy dinner, dancing and entertainment, don’t forget to take in the views of Waikiki, Diamond Head, Kahala Coastline, and Oahu’s south shore. The 2 hour dinner cruise is hosted daily, and on Friday evenings, there is an extended cruise and the tour is 45 minutes longer than other nights. Guests can experience the Hilton’s fireworks display from the ocean! The “Fireworks Buffet Cruise” is $10 more per person.

For any Majestic Dinner Cruises, motorcoach transportation cost is $14 per seat.

All the features of the Sunset Buffet, plus a 45 minute extension of time at sea that includes a spectacular offshore viewing of the Hilton Hawaiian Village’s fireworks show which is held each Friday evening.

All the features of the Appetizer Cruise, plus a 45 minute extension of time at sea that includes a spectacular offshore viewing of the Hilton Hawaiian Village’s fireworks show which is held each Friday evening.

Reservations: Advanced reservations required … Payment for Majestic reservations is required at the time this reservation is made. Atlantis Adventures will charge your credit card in full for your seats when your date and time is confirmed by their office.

Transportation: Additional fee of $14 per seat. 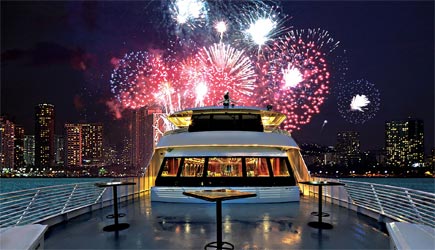 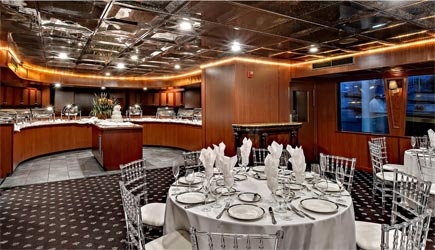 We can’t imagine why anyone would want to get off a cruise ship and then get on a smaller boat to go on a dinner cruise, but if that’s what you’d like to do, the Majestic & Star of Honolulu dinner cruises depart from the same harbor where cruise ships arrive in downtown Honolulu and the timing does work. If you’d like to do the Hawaii Nautical Sunset Cruises, it is about a 10 minute cab ride to Kewalo Basin Harbor.

Oahu is our favorite place to do a dinner cruise because it combines Hawaii’s natural scenic beauty with the Honolulu city lights at sunset. The Majestic is a beautiful new vessel that feels more spacious than the Navatek boat that it replaced. I went out on their dinner cruise recently with my wife and some friends to compare the differences. While the Navatek offered unique lines, the boat was starting to show its age. The Majestic is a more conventional-looking motor yacht, but looks new because … well … it IS new!

When we boarded the Majestic we were escorted to our table which is on the lower deck. Guests who boarded before us were already heading to the buffet line. At first it felt a little odd … I had never seen a dinner cruise where people start to eat before the boat even leaves the dock, but there is a logic to this. First, it minimizes the line going through the buffet. Second, starting to eat while the vessel is docked means you will have more time to wander around and enjoy the view after dinner. Just plan on eating brunch instead of lunch earlier in the day, so you are hungry for dinner when you first get on board.

In the past Coffee, tea, and soda were included with the buffet, but that is changing in 2019. Other than a welcome drink, all beverages (alcoholic and non-alcoholic) will be available for purchase with the dinner cruise. (are they taking their cues from the airline industry???) There is a nice selection of mixed drinks, wines by the glass and the bottle, and beer available for purchase. I thought the rates on these were reasonable. A bottle of wine that we buy for $15 at our local market was in the mid $20′s … not a bad markup compared to many restaurants.

The buffet itself was a nice upgrade from our experience on the Navatek a few years ago … both in terms of the quantity of choices and the quality of the food. You can also order a Lobster upgrade for $20 or a Steak and Lobster upgrade for $27 which we sprung for (hey, it’s a tough job … but I needed to get the full experience … I ate steak and lobster because I’m looking out for YOU!). Our friends thought the buffet was pretty good and they said they wouldn’t bother spending money on the steak and lobster upgrade. At any rate, it’s a decision you can make onboard.

The dining room itself looks very nice … three rows of round tables with huge nearly floor-to-ceiling windows gives everyone a great view. They aren’t selling “window seat upgrades” because it isn’t really necessary. If you are in the middle row of tables that isn’t right along the window, you’ll actually have a better view than someone sitting right next to the window (since the tables are round and their back would be turned to the view). And because you eat early your best views are going to be from the upper decks while you are walking around anyway. The second deck features a cocktail lounge with attractive and comfy leather sofas, a dance floor, live entertainment, and more nearly floor-to-ceiling windows like those on the lower deck. There is also an open-air bow area in front of the bar on this second level. The third and uppermost deck is an open-air viewing area with a covered roof. We really liked the ability to wander anywhere on the ship … this is NOT a dinner cruise where you are stuck at your table all night.

The one thing I miss a little about the Navatek … because of its unique hydrafoil stabilization system it was smoothest when it was cruising fairly fast, and for this reason they used to brag about being the only dinner cruise that went beyond Diamond Head … all the way to Koko Head. The Majestic is a conventional hull but has gyroscopic stabilization which works best at slower speeds, so they are now going as far as Diamond Head and cruising back to HonoluluHarbor. While it was nice to go further, the scenic attraction of dinner cruises on Oahu is the Waikiki skyline lit up at twilight, and as soon as you pass Diamond Head you lose that view anyway. So … not going as far actually gives you more time to enjoy the twinkling lights of Honolulu’s many tall towers.

The entertainment was small … one hula dancer, one singer, one band-in-a-box musician playing the guitar … but they sounded great and did an admirable job of attracting people’s interest. I thought it looked a little like a “tough crowd” when we first started the evening; by the end of the show everyone in the lounge was laughing and smiling. And here’s the nice thing … if you don’t WANT to watch the show you don’t have to … you can go outside to the bow and enjoy the view, or head to the upper deck. It’s your choice whether you want to have fun with the crowd in the lounge or go outside in search of a romantic spot to enjoy the night air.

One final note about the seating during dinner … tables seat 6 and 8 in the dining room, so couples will likely be seated with other couples during dinner … much like a typical cruise ship dining room. Some people look at this as an invasion of their privacy; others look at it as a chance to meet new people and talk about what you and they have been doing on vacation. It’s not uncommon to make new friends, and to have your vacation improved with the insight you’ve gained from someone else. And on this cruise you won’t be stuck at that table all night anyway!