We are accepting reservations for tours on/after November 1, 2020. Hawaii's plan to reopen to tourists who test negative for Covid-19 prior to their flight has been delayed. See our Covid-19 Update Post for details. Book tours now and pay later! For most tours, we will not process charges until just before your vacation starts!!!

A mother and calf just below the surface

A calf breaches in front of her mom's giant splash

Imagine getting this close to a flying whale!

Witnessing a whale breaching up close is a breathtaking!

A baby humpback whale comes out of the water to see the view, too!

Ask a QuestionReserve Now!!!
Humpback whales migrate to Hawaii in large numbers from December to April every year.  It is common to see people standing on a cliff overlooking the ocean and watching for signs of distant whale activity through binoculars. However, the best whale watching experiences are from a boat. Out at sea you get a much closer view…sometimes they surface right alongside the boat!  There is a tremendous difference between watching a whale splashing in the water two miles away and experiencing the thrill of looking over the edge of the boat and having one of these gentle giants swim directly underneath you. If you are here during peak season, look at the pictures above and then do yourself a favor and go on a whale watch. Here is a selection of Big Island whale watching tours or other cruises on which you are likely to see whales.

Hawaii Ocean Sports offers Wake Up With the Whales – a 90 minute morning whale watch on a sailing catamaran, casting off from the shore of Waikoloa. Kona coffee, juices, soft drinks, and granola bars are served. Morning trips are ideal because the waters are the calmest and whale sightings are guaranteed from December 15 – April 15! See a humpback or you can ride again for free!

Check In: Anaeho’omalu Bay (locals call it A-bay), on the ocean side of the Waikoloa Beach Marriott Resort

Hawaii Ocean Sports offers whale watching on a sailing catamaran departing from Kawaihae Harbor a few minutes north of Waikoloa. This 90 minute whale watching tour includes crunchy snacks, soft drinks and water. 9:30am is the most popular time for whale watching as it still offers the advantage of morning calm but makes for a more leisurely morning without the “early rising” required for the 8am whale watch.

Hawaii Ocean Sports offers whale watching on a sailing catamaran casting off from the shore of Waikoloa.  The 2 hour whale watch includes crunchy snacks and an open bar for beer, wine, and cocktails. 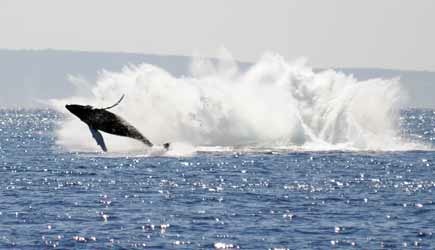 A calf breaches by it's mother 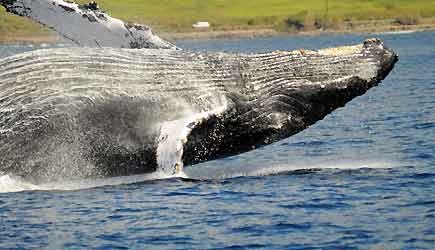 Big Island whale watching is unavailable for cruise ship passengers who are in port for the day as these tours depart from the Waikoloa area which is a significant drive from the dock; You might consider doing your Whale Watching on Maui.

No, you don’t have to go on a boat to see whales. During the peak season (mid-January to mid-April) it is very common to be able to see whales from the shore. But these sightings are usually pretty far away … it is not a particularly impressive sight to watch a whale jump out of the water three miles away. And these creatures are SO impressive when you experience them close-up. There is a big difference between SEEING a whale and EXPERIENCING a whale. Do yourself a favor … go on a whale watching cruise.

The Humpback Whales begin to arrive in November, and most of them have arrived by the beginning of January. Worried if you’ll actually see a whale? It’s GUARANTEED! At the end of your whale watch you’ll feel silly you ever worried about it. There are SO MANY whales here during peak season that locals refer to the ocean as “whale soup.”

How close will you get to the whales? That depends on the whales. By law, the boats must stop 100 yards away from a whale. They are incredibly curious animals though, and they OFTEN approach much closer than that. Sometimes they mug the boat and swim directly under it … you may even get the rare treat of smelling whale breath! The sound of a spouting whale is something you will not forget … it is much like the powerful puff of a steam engine locomotive.

The Sunset Whales and Cocktails cruise is very popular, and the more you have to drink, the more whales you will see (exactly TWICE as many! haha)

Best time of day? Well, it doesn’t much matter on the Big Island. Whales are equally active and will put on a great show all day long. The general wisdom in Hawaii is that morning is calmer than afternoon. The Kona Coast of the Big Island is a little different than Maui, Kauai, and Oahu. The sheer height of Mauna Loa blocks the trade winds and afternoons are often just as calm as the mornings. So … go when you want. The whales are waiting for you!