The Fastest Way to See the Volcano and Waterfalls! 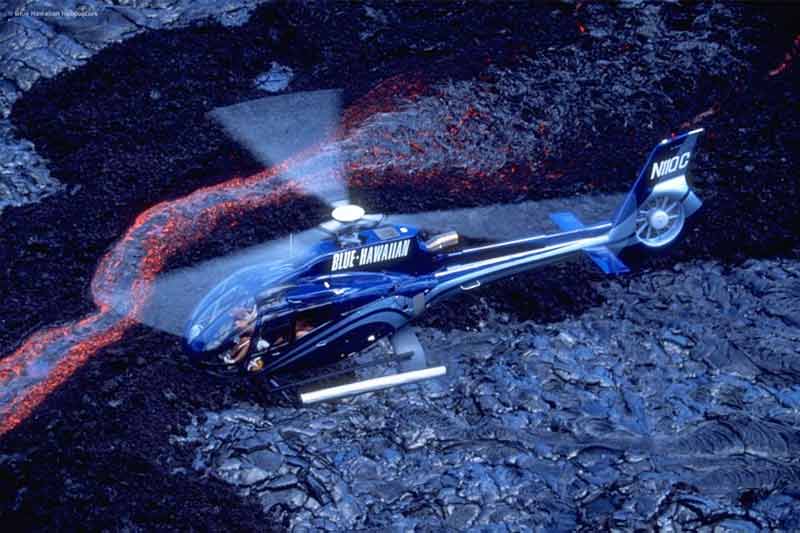 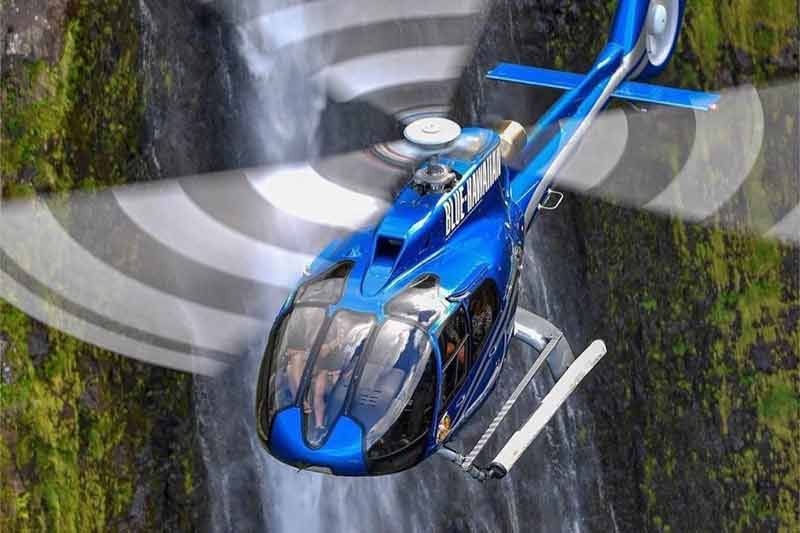 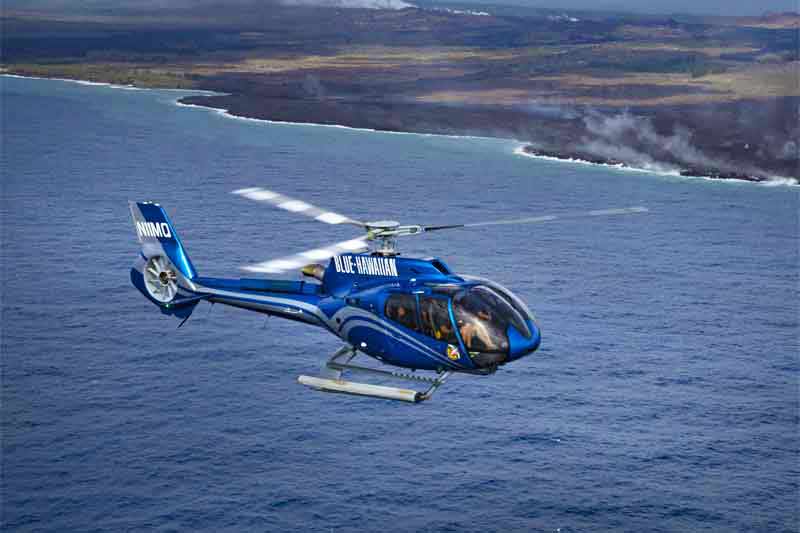 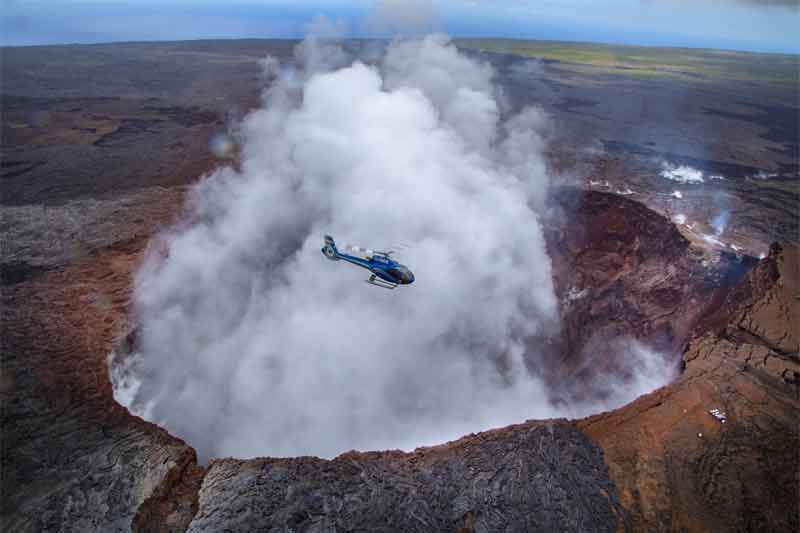 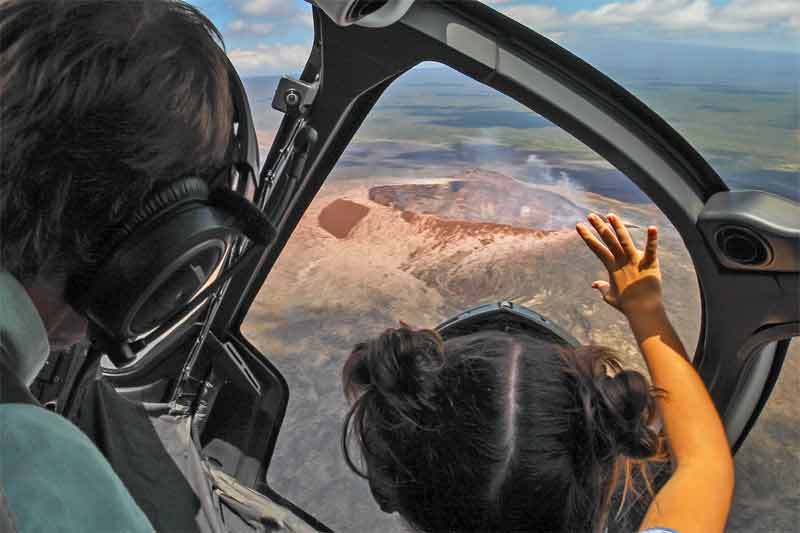 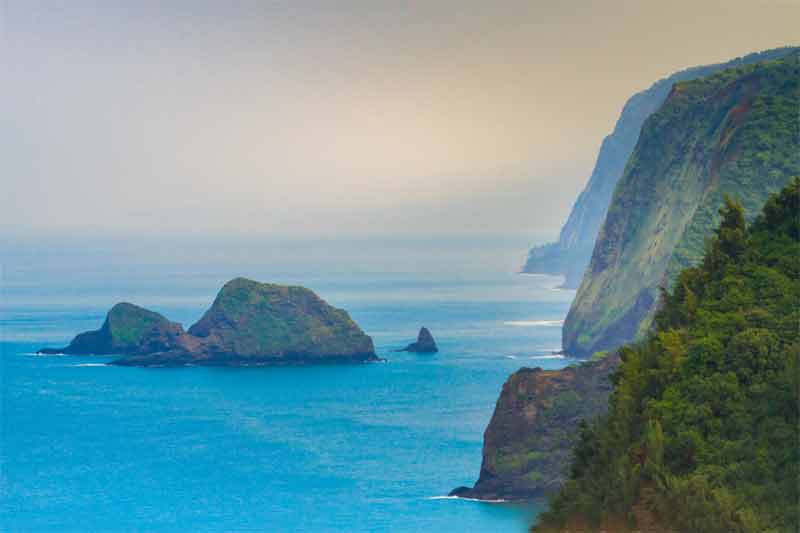 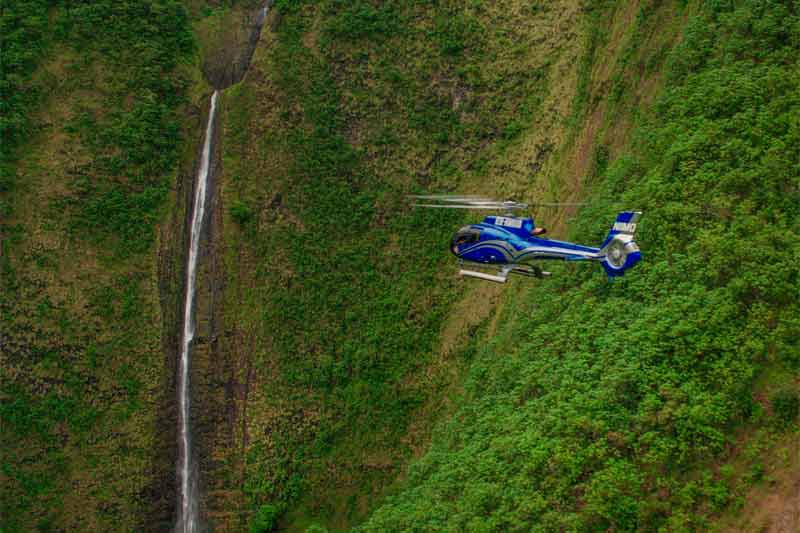 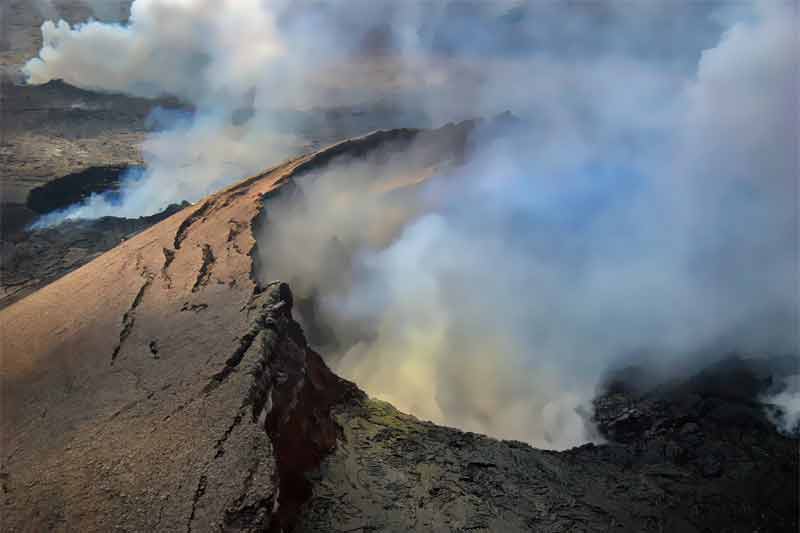 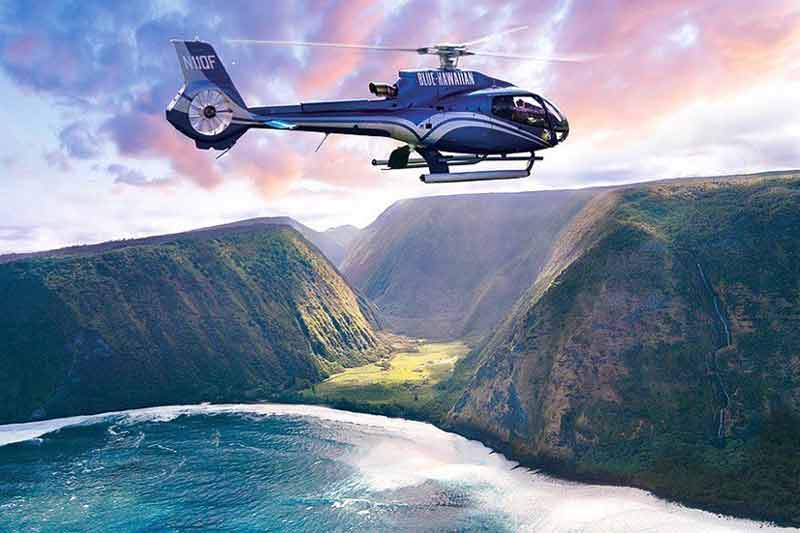 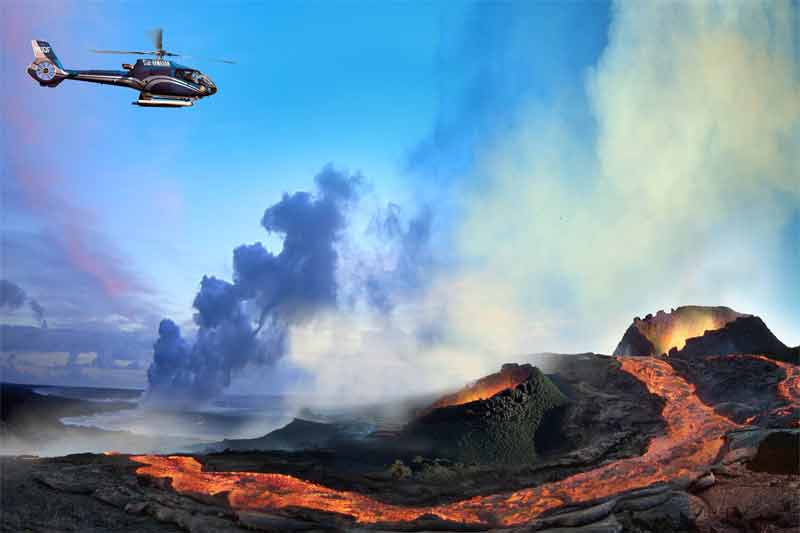 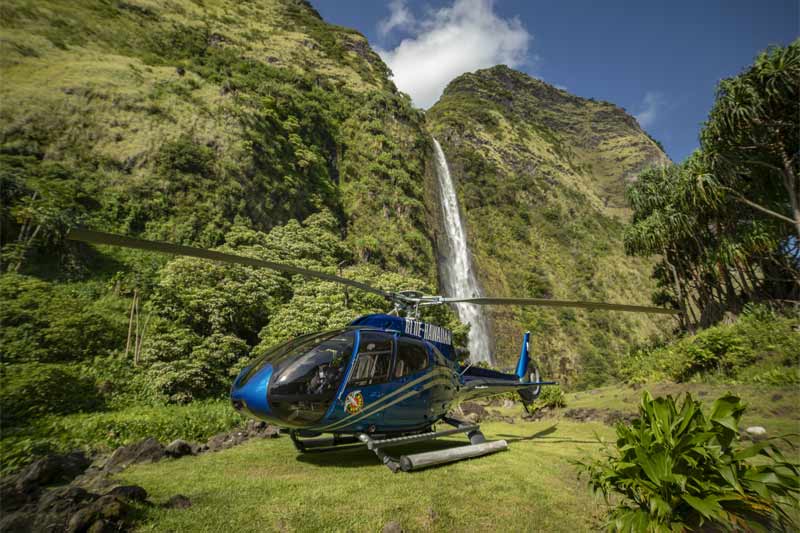 Blue Hawaiian Helicopters is the largest sightseeing tour operator in the state of Hawaii and the only one to have locations on ALL four major Hawaiian islands. They are the exclusive tour operator to fly out of the conveniently-located Waikoloa heli-pad area, which is very close by for those staying at the Hilton Waikoloa, the Waikoloa Marriott, and any of the condos in the Waikoloa Beach area. Blue Hawaiian flies these tours on state-of-the-art six-passenger Airbus EC-130 Eco-star helicopters, and all their pilots are also State of Hawaii Certified Tour Guides, which means you will get informative and accurate narration during your remarkable flight! Two flight options are available ... a longer tour that goes all the way to Kilauea Volcano and the Hilo area, and a shorter flight that heads straight for the most beautiful and remote part of the Big Island.

Discover the Big Island's magnificent beauty and its volcanic fury on this all-in-one Big Island helicopter tour. Get an up-close look at the famous Kilauea volcano, which has been continuously erupting since 1983; the results of its historic 2018 eruption provide phenomenal views. From the black sand beaches, and Madame Pele's amazing volcanic badlands, to the lush rainforests of the Hamakua Coast and the meandering valleys of the Kohala Mountains, you won't miss a thing on this Big Island helicopter tour! You'll see current lava activity, recent lava flows, tropical rainforests, cascading waterfalls, beautiful beaches, towering sea cliffs, and lush vallleys.

Witness the most spectacular scenery on the Big Island! Just north from Waikoloa lies the Kohala Mountains, an ancient volcano that now has deeply carved valleys and towering sea cliffs on its eastern face. See this stunning Kohala coastline of Big Island's North Shore, where the towering sea cliffs of Waipi'o Valley open into the dramatically deep and meandering valleys of the Kohala Mountains. On this helicopter ride, you'll experience beautiful waterfalls cascade thousands of feet into the rainforest below, where remnants of ancient Hawaiian settlements are still visible. This is a scenic adventure you will remember for a lifetime!

Schedule: Daily departures from Waikoloa Heliport. The tours are operated on an "on demand" schedule so booking early gives you the opportunity to select the flight you would like rather than the flight that is already on the schedule for your date and time.

Checkin: 30 minutes prior to your flight time at the Blue Hawaiian Helicopters Heliport across the highway from the north entrance to Waikoloa Beach Drive.

What to Wear: Passengers should wear comfortable clothing and dark colored shirts to reduce glare on the windows.

Capacity: 6 guests per flight. Any guests who weighs 240 pounds or more must buy a comfort seat at 50% of the cost of a regular seat.

Requirements: Weights and heights for each guest are required at the time of check-in. Staff may ask to check your temperature to ensure you are not exhibiting symptoms. Guests over the age of 5 are required to wear a protective face mask (covering the nose and mouth) before, during and after the flight. Please let us know if you have a medical condition preventing you from wearing a mask.

Reservations: Advanced reservations required and we recommend booking this a month or more before your arrival. A credit card is required to secure your space and Blue Hawaiian will charge you for these seats at the time your reservation is confirmed with their office.

Yes, helicopter tours are expensive. Honestly though, people don't come to Hawaii to save money. They come in search of the complete Hawaiian experience. The reality is that there is so much beauty in Hawaii that can only be seen from the air – that it is well worth it for those seeking the ultimate vacation experience. When you consider the thousands of dollars spent on airfare, meals, and accommodations on a Hawaii vacation, it only makes sense to spend a few hundred dollars more and REALLY see the island while you are here.

For those who don't have the time or the desire to spend the better part of a day driving to and from Hilo, the helicopter tours that leave from Waikoloa are the way to experience the active volcano. The Big Island Spectacular is an hour and 45 minutes in the air … remember this is the BIG Island after all … it takes time to fly to the other side of the island although not nearly as long as it takes to drive there. Of course with a longer flight comes a higher price. After seeing the Hawaii Volcanoes area you will continue over the Hamakua Coast north of Hilo, which has a series of rainforest waterfalls, then you will come to the isolated Kohala Coast with its towering sea cliffs and amazing waterfalls.

For those who want a sightseeing flight and don't want to spend as much, the Kohala Coast flight is a 45-50 minute tour that heads straight to the REALLY BEAUTIFUL part of the island. This tour doesn't go over the active volcano, but you will get a great perspective from the air on how the Big Island is formed as you see Mauna Loa, Mauna Kea, Hualalai, and Kohala volcanoes. The waterfalls featured on this flight are the same ones found at the end of the longer Big Island Spectacular.

Seating is assigned in the helicopters based upon body weights and for the best balance of the aircraft. Two guests sit up front next to the pilot, and the second row has four passenger seats. It is possible to pay an extra $100 per person to reserve the front seats, but you must fit certain weight parameters and you must buy both up-front seats. There are only two of them per flight, so if you are a party of three or four, only two can get the upgrade. If you are a party of 6 don't bother reserving the front seats. Two of the six people in your party will get those front seats without paying extra.

A word about children flying on these tours. There are no age restrictions at all on these flights. Child policy is the same on this helicopter as it is on a commercial airliner. Children 2 and older will require their own seat and will pay the same fare as an adult. Infants under the age of 2 are seated in the lap of a parent and fly for free. Be aware that if you push your child to do the tour and then they back out at the last minute, you will not get refunded because your child is afraid to do the tour.