Stay clear of crowds at the 200 acre private property exclusive to this tour!

The half mile hike is short but challenging!

You can also stay on flat ground and just take in the panoramic views!

Other stops on this tour include Halona Point Blowhole!

COVID-19 Update: This tour has been paused and the tour operator has not yet announced a date for resuming this event.

Reserve Now!!!
East Oahu Explorer is great for people who want something unique and steers clear of crowds from other tour companies and the general public. You will be shuttled in an air conditioned van to the 1,200 ft. high ridge top at Kamehame, which is part of the Ko’olau Summit Trail (KST).  From this rare perspective you will get spectacular views of two sides of Oahu.  Perfect for the mobility impaired as you can stay on flat ground to get this view. There is also an optional short but challenging half mile round trip hike.  From this privately owned clifftop perch, gaze overlooking Waimanalo Beach and the Pacific Ocean with several offshore islands. Other stops on this scenic driving tour include Diamond Head surf breaks, Hanauma Bay Nature Preserve, Halona Point Blowhole, and Sandy Beach Park (there are public restrooms available here). Youʻll pass through Waimanalo and make two historical Hawaiian stops at the ancient Ulupo heaiu (an agricultural temple) and the Nuuanu Overlook (a battleground cliff point where around 1795, King Kamehameha I army defeated Oahu’s Chief Kalanikupule and his army.)

Schedule: Daily at 9am

What to Bring & Wear:  Dress comfortably, wear good walking shoes, and bring a camera.  Outside the van, the views on these tours offer little shade, so be prepared for sun. 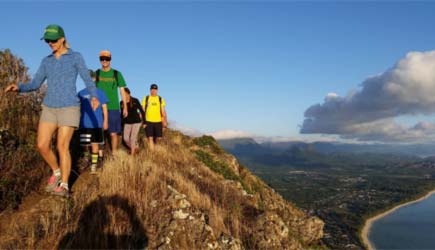 The hike is short but challenging! 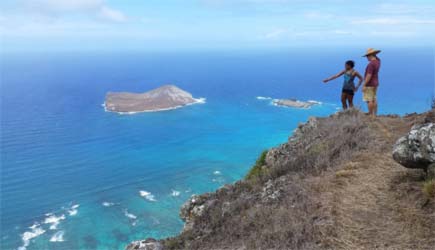 The East Oahu Explorer can work for cruise ship passengers who are arriving in Honolulu for the day.  They pick up at Aloha Tower Marketplace which is close to the cruise ship dock.  Call for details.

One of the most famous (or should I say “infamous”) hikes on Oahu led to a place known as “Dead Man’s Catwalk”, a concrete patch that led to the edge of a precipitous cliff with an incredible view down onto Waimanalo and out to the blue-green waters of the Pacific. The real name of the area is Kamehame Ridge, and the problem with this hike is that it was never legal. The land is private property; there was a real problem with vandalism of some antennas in the area, there was the constant threat of liability for the landowner, and people were taking all sorts of risky selfies at the catwalk (a quick Google search will yield some spectacularly stupid people doing ridiculously dangerous things). This place became wildly popular on social media and the problem just got worse. Eventually, the landowner was forced to crack down, gate the area, hire a guard, and rip out the patch of concrete that was encouraging the risky behavior.

Thanks to an agreement between the land owner and a reputable tour company on Oahu, this spectacular area is now open to the public legally for those who participate in the East Oahu Explorer tour! The catwalk has been removed, but the view are still the same! By partnering with this tour company, the landowner now has their liability concerns addressed, guests are supervised so there is no more vandalism, and everyone who really wants to see this area has the opportunity!

The tour opens up this view even to those who aren’t up for the 40 minutes of uphill hiking that was once required as the tour van is able to go all the way to the viewpoint. For those who want to stretch their legs you can scramble around on the ridge.

Starting September 13, 2021 and continuing for at least 60 days, guests participating in many Oahu tours will need to show proof of being Fully Vaccinated for Covid-19 OR show a negative test result taken within 48 hours of the start of your tour. This is in addition to the test required to gain entry to the state. If you are not fully vaccinated, please contact us for testing details for your specific tour.