Looking for whales in the calm waters of South Maui

Miles of tropical bays and shoreline to explore

Guides assist with launch and landings

Explore the south Maui coast with Molokini & Kahoolawe in the distance

Reserve Now!!!
Maui kayaking allows you to discover a unique side of the island when you paddle the stunning coastlines and pristine tropical waters teaming with sealife and coral reefs. These tours are all offered with South Pacific Kayaks, Maui’s most respected kayak touring company. They distinguish themselves with the island’s best guides and equipment. All South Pacific kayak guides are CPR and first aid trained for your safety and security. They offer an abundance of knowledge and treat each guest with professionalism and a true aloha spirit.

South Pacific Kayaks have resumed tour operations, but due to Covid-19 they are not currently serving any food on their tours.

This trip is planned as a leisurely paddle around Makena Bay available to all ability levels and ages. Whether it’s the first time on a kayak or experienced paddlers, this is a wonderful experience. The highlight of this tour is snorkeling with the Hawaiian green sea turtles.

Check in: Makena Landing which is in South Maui a little beyond the Wailea area.

Check in: Makena Landing which is in South Maui a little beyond the Wailea area.

The South Shore Explorer is an unforgettable 6 mile one-way trip down the beautiful south Maui coastline. Enjoy the scenery without having to retrace your route! Paddle along the highly acclaimed south Maui beaches, exclusive beach front homes of south Maui, the high end resorts of Wailea, and through to the renowned Makena Bay area, home to Turtle Town. This route provides you with scenery, exceptional snorkeling opportunities and gives you shoreline views of south Maui second to none. You will meet your guide at Kalama Park in Kihei, where you will launch and paddle one way to Makena Bay. This is a longer one-way paddle but on a normal day, currents and winds will be at your back. Two to three stops will be made along the way to enjoy snorkeling the reefs and watching the green sea turtles along the way.

Schedule: Monday through Saturday at 7am

What to Bring & Wear: Swimsuit, towel, sunscreen, and hat

Note: There are no “children’s rates” on these tours … price is per “paddler.” For odd number of guests, a single person will ride solo. 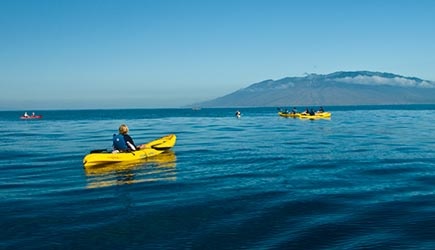 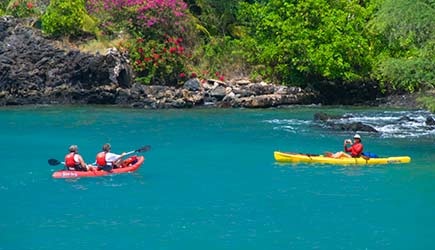 NCL cruise ship passengers in Kahului are able to do any of these kayak tours on their second day in port. Transportation is not included and is most economically done by renting a car. We can arrange a rental car with shuttle pick-up at the harbor.  Rates vary throughout the year but start around $40 per day in low season. See our rental car page for more information. Drive time is about 30 minutes for all tours.

These tours do not work for Lahaina cruise ship passengers due to the distance from the harbor.

I am very familiar with South Pacific Kayaks and their operation. I’ve purchased two kayaks from these guys over the years. They are the premier kayak outfitter on Maui and I recommend their tours highly. There are lots of other kayak companies; some of them are OK and some of them scare me. Go with the best … these guys really know what they are doing.

The shorter 3 hour tours are suitable for most people in reasonably normal physical condition. The longer tours are a little more demanding and require a better level of conditioning, but they do not require an extreme level of fitness. Most of the kayaks are tandem, so the work load is shared between two people.

The Turtle Reef Tour (3 hours) goes to a spot called “Turtle Town” which is aptly named … there are many sea turtles here and they are quite used to people swimming around them. You wouldn’t know they are an endangered species from the numbers of them that are seen in this area. This is an easy-going paddle trip with kids. This might be the trip for you if you’ve never paddled a canoe or kayak before, and aren’t very familiar with the water. If you don’t have kids and you are staying in South Maui, do the longer 4 hour versions that includes a second snorkel stop … or go for the 6 mile one-way paddle on the South Shore Explorer!

For vacationers staying in West Maui, it is a bit of a drive to get to the south Maui locations where these trips happen. They used to offer a tour closer to Lahaina, but they have had to cancel it so often due to winds in recent years that they have decided it is better (and more reliable) to plan all their trips in the South Maui area.

I recommend that you plan a kayak trip near the beginning half of your vacation. If wind or ocean swells force a cancellation of your tour, you have the opportunity to reschedule for a few days later when conditions are more favorable.

Some people ask, “Can’t I just rent a kayak and paddle around on my own?” Yes, there are beaches that have double kayaks available to rent for about $40 an hour. They will only allow you to paddle within a few hundred yards of the beach. Going further requires the knowledge of an experienced guide … someone who is familiar with Hawaii’s tricky winds and ocean currents.