Rinse off with a freshwater shower after your snorkel and swim

Your choice- comfy seats or ride the tubes!

Panoramic views of "The Cathedrals" on the Na Pali coast

Make new friends over lunch... as the raft anchors off the coast

Plan on getting wet and wild!

Ask a QuestionReserve Now!!!
The very best way to explore Kauai’s rugged Na Pali coast is on board an ocean rafting tour. The scenery along the Na Pali coastline is just breathtaking. There are sea caves and archways to explore, with numerous waterfalls falling directly into the ocean. Sealife abounds, including spinner and spotted dolphins, monk seals, and Hawaiian green sea turtles. Humpback whales are often seen during the winter months!

These rafting tours offer a huge advantage over most other companies on Kauai because of the proximity of the departure point to the Na Pali Coast. There are two different vessels that depart from the Kiki‘aola small boat harbor west of Waimea, which cuts 20 minutes or so each way on the trip to the Na Pali compared to the boats that depart from the Port Allen Harbor. This increases the amount of time you have along the scenic Kona and Na Pali coasts and cuts down on the time getting there and back. Tours operate from this west side location all year. The large 48 foot raft seats 35 people and offers the most comfortable journey.

This fast and comfortable boat offers shade and an on-board rest room, as well as a smoother ride than the smaller raft. This vessel is small enough to maneuver into sea caves during calm seas and is our favorite way to experience the coastline of the Na Pali.

Schedule:  This tour operates 7 days a week from May through October and on Monday, Wednesday, Friday and Saturday from November through April.  Tours are offered at 7:30am.

Check In:  30 minutes prior to departure at Kikiaola Small Boat Harbor.

Restrictions:   Minimum age is 5. No pregnant women, and no one with neck or back injuries permitted on the tour.

What to Bring & Wear:  Wear swimsuits and bring a towel and sunscreen.

Cancellation Policy: Cancellations must be made at least 48 hours before the start of the event 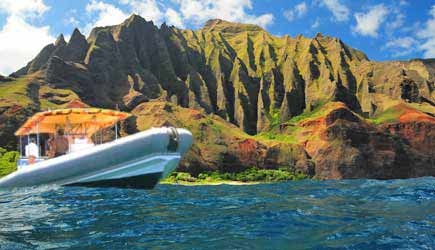 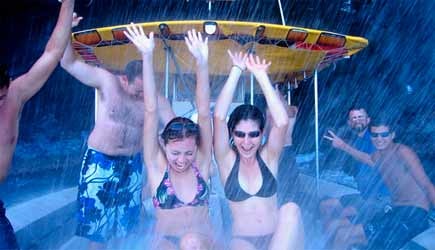 Get wet & wild under ocean waterfalls!

The Na Pali Explorer morning tours do not work for cruise ship passengers. If you are on the Pride of America and overnighting in Kauai, you can do an afternoon tour or you might also consider a Sunset tour of the Na Pali on the afternoon / evening of day one in port.

I’ve been on numerous Na Pali boat tours but a day on the water with the Na Pali Explorer took me further along the Na Pali coast than I’d ever been before. Their closer departure point to the Na Pali allows more time to explore this spectacular area.

The Na Pali Explorer large raft allows you to have comforts (shade and an on-board rest room) that you’d get on a larger boat, but it still offers the low-to-the-water ride of a zodiac raft. It has a smoother ride than the smaller zodiacs but it is still fast enough to cover the entire Na Pali coast and small enough to get into several spectacular sea caves. As a matter of fact, I believe you get to see more of the Na Pali on the larger raft. While the smaller raft is doing a beach landing, the larger raft goes further along the Na Pali coast and offers more time for exploring this incredible coastline.

There are some days along the Na Pali, especially in the wintertime, when a huge north swell will prevent any raft from entering any of the sea caves. Just being close enough to witness these monster waves crashing on the cliffs is a spectacular experience. Occasionally in the wintertime conditions will not allow the raft to reach the Na Pali. If that’s the case the captain will select an alternate destination along the south shore that is safe and offers a memorable day on the water. While the Na Pali is always their preferred destination, even on days when they can’t get there they guarantee you a great time and a fun adventure. As a general rule if it is too rough for these guys to go to the Na Pali, it’s too rough for any boats to go there.

As a resident of Hawaii, I consider the Na Pali coastline to be the most scenic and most sacred place in the islands. There are better places in Hawaii to snorkel but nothing compares with the dramatic scenery and raw natural beauty of this wild coastline.

If you’re staying on the north shore between May and September, you may want to consider Hanalei Na Pali Rafting, and if you prefer more of a rough and rugged adventure with a beach landing and shoreline exploration, we suggest Kauai Sea Tours Rafting.