We are accepting reservations for tours on/after November 1, 2020. Hawaii's plan to reopen to tourists who test negative for Covid-19 prior to their flight has been delayed. See our Covid-19 Update Post for details. Book tours now and pay later! For most tours, we will not process charges until just before your vacation starts!!! 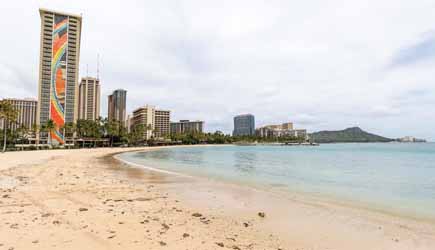 Waikiki Beach with no people

Here in the Hawaiian islands we are still dealing with a second wave of the pandemic that has far exceeded the cases we had during March and April. Numbers have begun to back off and the last few days have seen less than 100 new infections per day state wide. Most of the cases are still on Oahu, which is the most populated island (by far). Maui seems to have the second wave under control at this time. The Big Island has become the second island with some concern, and Kauai continues to have very low numbers. Due to the late summer surge in cases here in Hawaii, the 14 day quarantine remains in place for anyone arriving from out of state (international or from USA mainland). There is also a 14 day quarantine for anyone traveling interisland  when they arrive on Maui, Kauai, or the Big Island. Oahu has shelter-in-place orders and closures of beaches and parks in force at this time. We still have no clear picture on when things will return to normal here and we will once again start welcoming visitors to the islands. We’re currently accepting reservations for tours and activities after November 1, 2020 which is the EARLIEST possible date we see for opening the state back up to tourism.

Hawaii continues to struggle with firm plans to reopen to tourism. Covid-19 case numbers remain very low on Maui, Kauai, and the Big Island, but there has been a surge of new cases on the island of Oahu (where Honolulu and Waikiki are located). This is to be expected as it is the most populated island (by far). Currently Oahu is consistently reporting around 150 new cases per day, which led the neighbor island mayors to request that the 14-day quarantine for anyone traveling inter-island be reinstated. That request has been granted by the governor. At this time the earliest we anticipate any potential to reopen to mainland visitors is October 1st, 2020.

CURRENT STATUS OF TOURISM IN HAWAII

With tourism being the #1 industry in Hawaii (by far), the Covid-19 pandemic has had a debilitating effect on the state. When the outbreak was increasing exponentially in mid-March, the mayors of each county implemented shelter-in-place orders and closed all non-essential businesses. By April 1st most visitors to the state had departed; hotels and vacation rentals and restaurants were shuttered. A mandatory 14-day quarantine was put into place for anyone arriving from out of state, and was soon expanded to include residents who were traveling from one island to another within Hawaii. Mask wearing was made mandatory in public places, and all gatherings were prohibited. We weren’t even allowed to lay on the beach.

HAWAII IS A SAFE PLACE While many of these actions felt draconian at the time, they were effective in preventing the virus from gaining a serious foothold in Hawaii. Hawaii has been one of the safest places imaginable to ride out this pandemic … at least from a physical-health standpoint. During the first wave in April the number of statewide infections was limited to around 300, and there were about 15 deaths of those who had tested positive for the disease. In May and early June our count of new daily infections had dropped to single digits or even zero!

BUT WE ARE HIT HARD The measures effectively protected the residents of the state, but this came with a steep mental, emotional, and financial cost. Unemployment in the state hit 30%. Without the economic engine of hospitality and tourism, the state will not recover and the economic impact was threatening to be far worse than the disease itself. Interisland travel restrictions were eased in mid-June, but the 14-day quarantine for visitors to the state remained in place. A group of tourism industry professionals began lobbying the governor to come up with a plan to reopen. Some even filed a lawsuit in federal court that sought to overturn all of the protective actions that were taken by the governor and the mayors of each county. 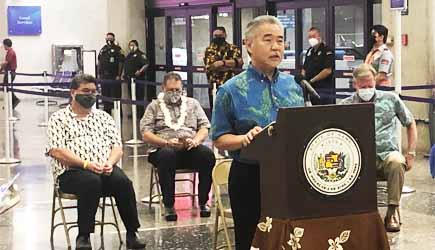 Governor Ige announcing a plan to reopen at Honolulu Airport

FINALLY A PLAN TO REOPEN After weeks of pressure, on June 24th Governor Ige announced a plan to reopen the state to mainland travelers based upon a pre-arrival testing requirement similar to a program that had been implemented in Alaska. Guests would be required to take a Covid-19 test within 72 hours of their flight to Hawaii, and needed to present a negative test result prior to boarding the plane. No quarantine would be required upon arrival in Hawaii. We were all hopeful this plan would succeed and we would start to see mainland arrivals during the first week of August.

SETBACKS Unfortunately it soon became obvious that this plan could not be safely implemented by August 1. There have been a number of setbacks to reopening. First, there has been a massive surge in cases in Florida, Georgia, Texas, California, and elsewhere. The Hawaii plan to reopen assumed that infections were on the way down on the mainland. Second, due in part to the surge of new case it is not realistic for most potential travelers to be able to get tested and to get results back quickly enough to meet the requirements. In many states it is just not possible to get tested unless you are showing symptoms, and test results are taking more than 72 hours. Thirdly, Hawaii itself has seen a second wave of infections due to loosening of social distancing requirement, graduation parties, Fourth of July gatherings, etc. Our current numbers statewide are still modest compared to most states, with a cumulative total of 1300 infections and 24 total deaths attributed at least in part to Covid-19.

CURRENT PROGNOSIS At this time the earliest the state will open the pre-testing program is September 1. Some of our tour operators are waiting until October 1 to return to operations. When those operations do begin I am sure there will be many changes to the details of tour features. Snorkel boats will likely be limited to 50% of regular capacity to maintain social distancing. Luaus will likely be changed from buffets to full table service with empty space left between different parties. Because capacities will be more limited, prices of tours will likely increase, at least until things get “back to the new normal” after effective treatments are identified and a preventative vaccine is widely available. 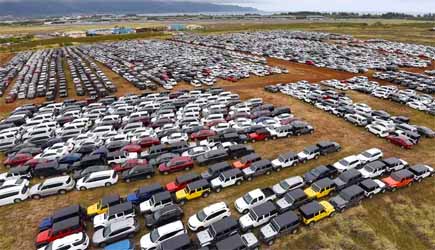 Acres of unused rental cars parked in a Maui field

OUR OFFICE We are a family-owned business, and all of our staff (most of whom have been with us over 10 years) are now laid off. When this is all over we will still be here, and we hope to get back to normal operations just as quickly as possible. Our reservations phone lines are not open at this time, but we are responding to voicemails and emails and processing on-line reservations in a timely fashion. Our phone lines will reopen just as soon as a definite date for a resumption of vacation travel to Hawaii is confirmed.

YOU CAN HELP! For those of you who had reservations that have been canceled due to the pandemic, we are keeping all your information in our “on hold” queue so that when you rebook your Hawaii vacation, all you need to do is give us new dates and we will restore your tour reservations based upon your future travel plans. You can really help our state by planning your future travel to Hawaii as soon as it is feasible. It will be a great time to come to Hawaii, as the islands will be as uncrowded as you will ever find them.

You might also consider purchasing our gift certificates for friends and family who will be traveling with you, or coming for a honeymoon or special occasion. Gift certificates are good for FIVE YEARS and can help inject income into our struggling economy.

As always, we advise you to plan your tours in advance … you might be able to beat some of the certain price increases that will be coming soon. It will also give you guaranteed space as some tours will be tough to acquire space due to more limited capacity and social distancing. Most of our tours are “plan now, pay later” so it doesn’t cost extra to reserve in advance. Most tours are not charged until just before the start of your vacation.

Leave a Reply to Adventure In Hawaii Cancel reply